Shadow on the Sun Launches

Shadow on the Sun Launches

Today, Shadow on the Sun, the final book in the Black Hole sun series, launches in hardcover and ebook. It’s hard to believe that the story wraps up after four books in three and half years.  Every book has its trials and tribulations, but as my grandmother would say, Shadow on the Sun put me through some changes. I think that the last book in a series doubles-down on that because you’re not only writing a novel, you’re keeping a promise to your readers that started with the first sentence of the first book. Hopefully, I kept any big promises I made. The little ones will have to wait for the reader to fill them in.

I would be remiss in not  publicly thanking Suzanne Collins for allowing us to use the wonderful blurb that graced the covers of the three hardcovers. Thanks, Suzanne.

The flap cover copy of Shadow on the Sun:

Durango has always relied on Mimi—once his tough-as-nails squad leader, she is now the bitingly sarcastic artificial intelligence flash-cloned to his brain. Mimi is the only reason he is alive. Durango has always looked out for his devastatingly beautiful and brave second-in-command, Vienne—now wounded, crushed, missing. Vienne is the only reason he wants to live. Durango hasn’t always despised his father. But he does now. Lyme wants Durango to be the Prince of Mars, and he’ll stop at nothing to realize that dream. He’ll sacrifice anything and anyone in the name of domination. Even Mimi. Especially Vienne. Lyme forgot one thing. You don’t want to mess with Durango. 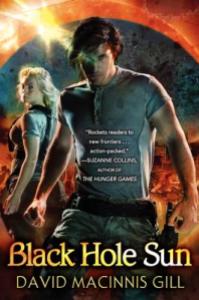 Shadow on the Sun, Book 3